Update - I've been advised there are problems with this style of swapping:
Instead, you can buy a USB enclosure for your extra HDD and backup over USB. Two things to note with this approach:

Bulletproof Backups with the ReadyNAS Duo

Update: I wrote up my findings, four years on, in this new blog post!I just invested in a ReadyNAS Duo, which is a mean-looking little device: 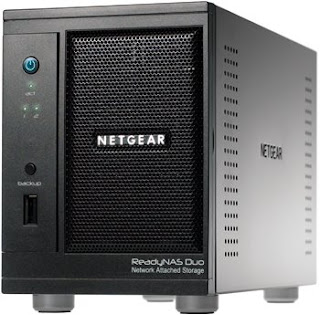 It's small (smaller than a shoebox), quiet (about as loud as a fridge), got terabytes of storage and can run autonomously doing all kinds of things (FTPing files, hosting web sites, downloading BitTorrents, etc.).

It's so flexible infact, there seems to be a lot of confusion on the forums around which strategy to adopt to make best use of it. So I thought I'd write this quick blog on how I use it as a really good backup device.

Well, don't use it as your main hard disk drive (HDD) anyway. It's tempting to try and move all your important files onto it, so that if your PC dies you can just hook up a different PC and off you go. But networks are much, much slower than local HDDs and it just isn't practical. Even e-mail programs run sluggishly if you're serving their EXE over the network.

Instead, get a good mirroring program like MirrorFolder, and have it mirror your HDD to the ReadyNAS frequently (even in real-time, if you like).

Expect your PC to fail. Create a separate partition on your local HDD and call it something distant from C: (like N:). Then move all your important programs to it and configure them to be running off N: drive. This can be a tedious process, but once it's done your entire environment is relative to N:, which means as (and when) your PC fails, you can hook up another PC, map drive N: to the ReadyNAS and be up and running again nearly instantly.

Of course, it'll be slow (see Step 1), so ultimately you'll want to copy everything back to the 'mirrored partition' model on that new PC, but if your old PC dies and you need to continue working immediately for, say, the rest of the day it should suffice.

Oddly, the ReadyNas Duo's weak spot is its backup software. You can't do weekly backups, or monthly backups, you can't filter out file types etc. etc.

Most suggestions on the forums are to work around this using some 'real' backup software instead, but that's silly because then it ties up your PC again while doing the backup. Instead:
Step 4: Trust nothing

Of course, even though your ReadyNAS is a secure backup of your PC, if you lose both at the same time you're still screwed. I'd recommend keeping the ReadyNAS in a separate part of the house to your PC, so that it's not lost in the event of a localized fire. But if the entire house burns to the ground, that's no help. Some of the forum backup strategies say 'buy another NAS' but there's a much nicer way:

But you can also use it for off-site backups!

Invest in a third HDD and NAS drive tray (yes, you buy them separately if you hunt about a bit - the ones for the ReadyNAS NV+ are compatible). Then, on a weekly/monthly basis, swap one of the drives. Because you buy a third tray, you can leave the HDD screwed into the tray, so swapping takes very little time. 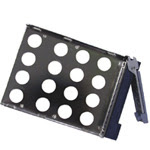 Take the HDD you took out and keep it off-site. Now, even if your house burns down, you're covered!


Posted by Richard Kennard at 3:28 PM