By Zack Whittaker | April 23, 2012, 12:12pm PDT
Summary: Dropbox has painted a giant target on its back by offering one simple, additional feature to its file-storage service: a link-generating button to enable public file-sharing.
As file storage favourite Dropbox adds the option to turn private files it stores into public, linkable content, it has overnight transformed into a de facto file-sharing service.

The trouble is that nothing seems to differentiates Dropbox from any other file-sharing website, including troubled Megaupload. 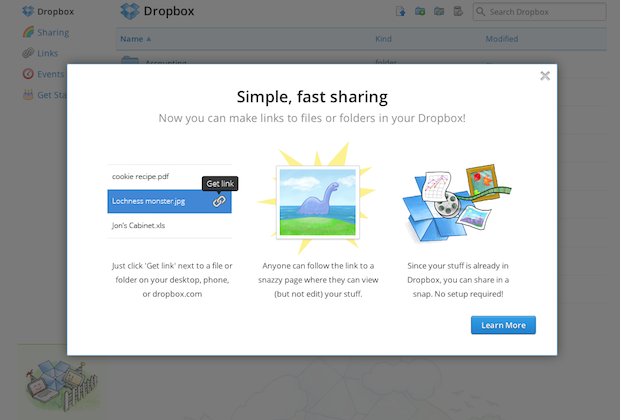 Megaupload was shut down for among many things, criminal copyright infringement and conspiracy to commit copyright infringement. Its executives were arrested and the extradition process began within hours of their detention. The company continues to battle its case despite reports suggesting the prosecution’s legal case is close to collapse.

In a similar set of circumstances, 23-year-old British student Richard O’Dwyer is to be extradited from the United Kingdom to face charges in the United States — though his website and server was in Europe, and the UK previously ruled on a similar case which deemed his activities legal — for hosting a link-sharing website. No copyrighted content was hosted on his site, but mere links pointing to U.S. movies and television shows.

Dropbox chief executive Drew Houston concedes that sharing documents, pictures, and files on the Web to anyone you know — regardless of whether they are in your social network or not — is still “bafflingly, still really difficult.”

All good and well. But what truly separates Megaupload’s or O’Dwyer’s case from Dropbox?

Nothing does. Here’s why.

A user uploads the latest episode of House to their Dropbox account, and enables the link-sharing feature. They then share the link with a few friends and they download it. Or, they submit the link to a link-sharing forum — and there are plenty of them, rest assured — and hundreds or thousands go on to download it.

Maybe Dropbox gets suspicious, or maybe it blocks the file on upload for infringing copyright. Or it fails to, and like the recent YouTube case in Germany, is forced to shell out for a more stringent filtering system. Either way, Dropbox will all but inevitably end up in court.
Or, someone takes to another file-sharing site to upload copyright infringing files and takes a note of the link. Rinse and repeat a dozen times. They then create a document that contains links to other file-sharing sites. It could then be shared by friends and family, or even to the wider community.

That list alone uploaded to Dropbox would be illegal under U.S. and now UK law, and could lead to extraditions and prosecutions of not only the infringer, but a mass copyright suit in Dropbox’s inbox.

Dropbox is no different from any other file-sharing site. It allows users to upload files, and it allows them to share the files by way of sending others’ links to that file. The file can then be downloaded and redistributed either on Dropbox or elsewhere.

It has no legitimacy, nor does it have legal protection. File-sharing is big business, and Dropbox makes hundreds of millions if not more. It was estimated to generate at least $240 million in 2011 alone, and its revenue comes from premium accounts offering additional storage and enterprise clients.

Granted, it isn’t quite a referral scheme, in which users can upload content — most of it often infringing someone’s copyright, such as television shows, movies and music — and generate revenue based on how many clicks and downloads are made which ultimately draws in traffic for the site. But it makes money from those who upload large files or require vast spaces to store their content.

RapidShare, which for years ran a similar referral scheme, denied this week violating copyright laws, and released a “responsible practices” manifesto for cloud storage companies. RapidShare, along with Dropbox, could kick off infringers off its site, and even report repeat infringers to law enforcement.

But who would use a service that may issue false positives and lead to unfounded allegations and investigations based on a third-party’s suspicion?

Dropbox had for over a year fringed on becoming something more than it was. But the reality is that Microsoft’s SkyDrive and Google Drive could fall to the same fate. SkyDrive offers public linking, and Google Drive is expected to offer a similar feature to which its sister service Google Docs also offers.

What do Microsoft and Google have that Dropbox doesn’t? Money to install heavy-duty, zero-tolerance copyright catching filters, and the money to pay for lawyers when it inevitably blows up in their respective faces.

Or it shows an entirely different picture. If Dropbox, and other file-sharing heavyweights like Microsoft and Google all offer file-sharing capabilities, perhaps its time for the MPAA, RIAA, and the rest of the “copyright cartel” to back down and concede that it cannot repackage the plague that emerged from Pandora’s box.


“Dropbox explicitly prohibits copyright abuse. We’ve put in a place a number of measures to ensure that our sharing feature is not misused. For example, there’s a copyright flag on every page allowing for easy reporting, we place bandwidth limits on downloads, and we prohibit users from creating links to files that have been subject to a DMCA notice. We want to offer an easy way for people to share their life’s work while respecting the rights of others.”