More options than ever

Yes, this means you can configure an $1849 Mac mini—and that doesn’t include a keyboard, mouse, or display. (As with previous Mac mini models, you bring your own peripherals.) To be fair, few people are going to max out their Mac mini with all these options. But for those who actually need this kind of performance in a tiny package, it’s nice to know you can.

Unless you tend to work in only two or three applications—and even then, depending on the programs—I recommend upping the $599 mini from 2GB to 4GB of RAM. In testing the stock model, I regularly saw memory-related slowdowns once a number of applications were running; the $799 mini's 4GB offered a much better experience. 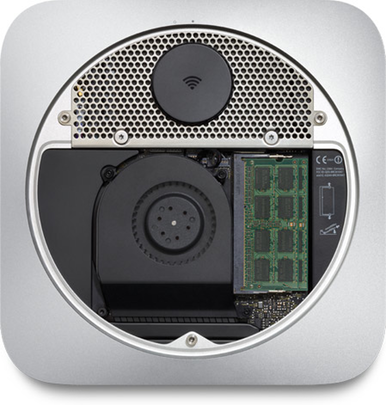 Of course, as with most Apple RAM upgrades, you’ll get a better deal if you buy from a third-party vendor—making sure to get RAM that meets Apple’s specifications—and install it yourself. For example, reputable third-party vendors are currently selling 4GB of memory for the new mini for roughly $45, with 8GB around $65. You can also get more RAM in your mini from third-party vendors: While Apple’s official specs say the Mac mini maxes out at 8GB, accessory vendor OWC is already selling a 16GB upgrade—for a whopping $1400—that the company says is fully tested and compatible.

As with last year's mini, memory installation is surprisingly easy: You just rotate the computer’s plastic base a few degrees counterclockwise and lift it off, pop out the two stock chips, snap in the new chips, and replace the base.

While Apple still doesn’t consider the Mac mini’s hard drive to be a user-upgradeable part, iFixit’s teardown of the 2011 model shows that replacing the stock hard drive is a relatively simple task. (Apple’s general policy with the Mac mini line has always been that as long as you don’t break anything during the process, upgrading the hard drive won’t void your warranty.) Which means that if you’re looking to increase the performance of the mini, or get more storage, you can save a few bucks by skipping the build-to-order options and instead shopping for a 9.5mm, 2.5-inch laptop hard drive. For example, at the time of this review, a 750GB 7200rpm drive is just $85 to $100 from Newegg.com, and a 1TB 5200rpm drive is around $125.

In other words, while bumping the $599 Mac mini to 8GB of RAM and a faster, bigger hard drive through Apple will set you back $450, going the DIY route will cost as little as $150.