One of the many understated features in Mac OS X Lion is the ability to natively convert audio to m4a directly in OS X Lion’s Finder – without any additional downloads or add-ons. Yes, an MPEG audio encoder is built directly into Mac OS X 10.7, meaning you can convert audio directly on your desktop without using any other apps, and it’s really fast too.

OS X Lion’s audio encoder is confirmed to support AIFF, AIFC, Sd2f, CAFF, and WAV files, but other formats are likely supported for m4a conversion as well. Here’s how to use it: 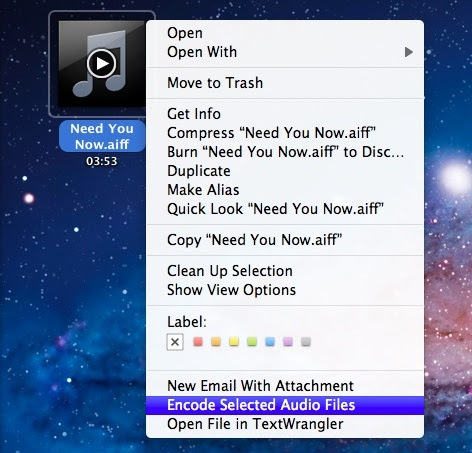 The audio encoder is very fast and within just a few seconds you will have an m4a file ready to import into iTunes or elsewhere. You can also batch process a group of audio files to convert them to m4a using this tool, just select a group of files instead of one.

The same encoder in Mac OS X Lion also includes the ability to encode and convert video files directly in the Finder too, making this utility even more powerful. By selecting a movie file, you can also choose to strip the video and directly encode the audio track, which is another nice touch.