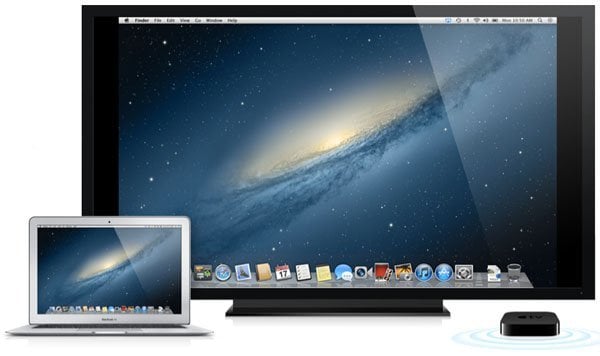 Apple today unveiled the developer preview of Mountain Lion, a new version of Mac OS X that includes new features like Notification Center, Messages, Game Center, Notes, Reminders and Twitter. But the coolest feature of Mountain Lion is undoubtedly AirPlay Mirroring that lets you stream what’s on your Mac to your HDTV via Apple TV 2.
With AirPlay Mirroring built into Mac OS, you will be able to stream whatever is on your desktop – webpages, photos, videos,  presentation – directly to your HDTV, with only one click on an AirPlay icon on the OS X menu bar.


AirPlay mirroring has already been available for some iDevices for a while, letting you wirelessly share whatever is on the screen on your iPad 2 or iPhone 4s to your HDTV using Apple TV 2. Now you can do the same thing from your Mac.

According to Engadget, Apple is also working to let users stream full-screen content directly from iTunes.
Posted by 50kzone at 01:52