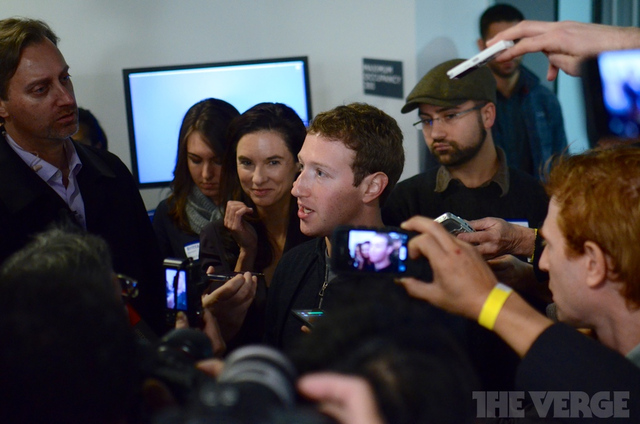 204
inShare
One week ago, Facebook Director of Product Blake Ross announced that he’d leave the company in a goodbye letter he posted on his profile page.

"I’m leaving because a Forbes writer asked his son’s best friend Todd if Facebook was still cool and the friend said no, and plus none of HIS friends think so either, even Leila who used to love it, and this journalism made me reconsider the long-term viability of the company."

A few sentences later, Ross wrote, "In all seriousness, even after switching to part-time at Facebook, it’s just time for me to try new things," but the damage was done. Ross has since removed the letter, perhaps because he’d accidentally posted it publicly, or because his jesting intro wasn’t taken as lightly as he’d hoped. The "journalism" Ross mentioned is hardly Pew Research, but it means something. Facebook admitted in its annual 10-K report that it might be losing "younger users" to "other products and services similar to, or as a substitute for, Facebook." Teens are often an accurate barometer for what’s cool and what’s next, and recent rumblings seem to indicate teens are moving on. Telling your colleagues that teens are no longer into your product is far from an Irish goodbye.

When Branch co-founder Josh Miller asked his fifteen-year-old sister what was hot, she said Facebook had gone cold. "She tries to visit Facebook as infrequently as possible," Miller wrote, because it’s addictive, and because it’s not as fun as Instagram. "Facebook may have an irreversibly bad brand," Miller concluded. But what if it’s not about brand, but about the changing definition of what’s fun and addictive online? Perhaps more importantly, the community on Facebook and the culture of the web is changing, and privacy is starting to trump sharing for young users.

What if it’s not about brand, but about the changing definition of what’s fun and addictive online?
"I think it has less to do with kids consciously looking for 'the next big thing' than Facebook just no longer being a space that serves them," says Laura Portwood-Stacer, author of "Media Refusal and Conspicuous Non-Consumption: The Performative and Political Dimensions of Facebook Abstention". "I think kids are less self-conscious about trying to be cool than marketers would like to think," she said. When Facebook launched, it was cool to expose details about yourself, like what movies you like, what you’re doing right now, and who you’re in a relationship with. It was, dare I say, exhilarating — being able to share freely with the world without having to learn how to code or even how to apply a MySpace theme.

At some point, adding these details, like hundreds of photos from a recent vacation and status updates about your new job amounted to bragging — force-feeding Facebook friends information they didn’t ask for. What was once cool was now uncool. Worse yet, it started to feel like work. Maybe the burden of constantly constructing immaculate digital profiles of ourselves is tiring. "I find it boring, and I don’t really care about knowing all my friends’ details anymore," my fifteen-year-old cousin Neah Bois wrote to me. "I think it’s stupid when people post a lot of pictures about their lives and all that stuff… I go on to talk to family and connect, but really I only go on once a week or so."

Teens have turned to sites like Tumblr and apps like Snapchat and Instagram to communicate. "Tumblr is mainly my obsession as of now," says 15-year-old Collin Wisniewski. "It just seems more intimate and its not really a place of bragging, but more of a place of sharing." "Does this sound familiar?" asks Adam Rifkin in a TechCrunch column. "Teenagers, amusing images, sharing only with trusted friends? In some ways, Tumblr is actually Facebook 2.0!" he writes. Some data suggests that Tumblr may have already eclipsed Facebook as the most popular social network among 13-25 year-olds.

"[Tumblr] just seems more intimate and its not really a place of bragging, but more of a place of sharing.

Part of Tumblr’s success is no doubt due to that fact that it’s a place where you can cultivate two or more identities, whereas on Facebook you’re stuck with just one: the real you. "It’s a site where you can find people that are like you and you can feel less alone," Wisniewski said. Tumblr’s simple and binary privacy controls may have also contributed to its success. "As Facebook has become a real-life social network infested with parents, co-workers, ex-friends, and people you barely know," Rifkin writes, "Tumblr has become the place where young people express themselves." Bois concurred. "I’m kind of obsessed. [Tumblr is] the new Facebook almost," she said.

On the mobile devices that have become so central to our lives, "ephemeral" apps like Snapchat have emerged as a private way for friends to share photos. In the age of the dox — where a sense of online privacy is very sacred, being able to communicate without leaving a permanent record is empowering. Whereas photos on Facebook last forever, photos on Snapchat typically last about ten seconds. "I would say that this app really is one of my major communicating devices more than really a social network," Wisniewski says. "My sister maintains that Snapchat is up there with Instagram, in terms of usage amongst her peers," Miller wrote.

Ultimately, the day of the overshare may have passed, and bragging online isn't as fun as it used to be. "I think that kids just don’t care anymore," Bois wrote. "They have gotten over the idea of knowing everybody’s life and everybody knowing their lives!" Fortunately for Facebook, it has become adept at reshaping itself whenever a new tech trend emerges, like peer-to-peer messaging. "Facebook has been particularly agile about following how people are using it and trying to anticipate what will keep people using it," Portwood-Stacer says. The company has sculpted its messaging platform into the most functional and useful cross-platform communication service, which most teens admit that they use, and has even added free calling to its Messenger app. Facebook is still on the way up as a pure communication utility. It has also taken steps to decrease the amount of Open Graph "spam" users receive in response to criticism.

"I don’t actually think Facebook itself is stale," Portwood-Stacer says. "It’s all about changing things up on you when they roll out some new feature… It is more socially stale, if that makes sense." Today, it’s just not as cool to post pictures of yourself online, no matter which social network you use — unless you’re taking "selfies" ironically, of course. "About 40 percent of everyday speech is devoted to telling others about what we feel or think," reported the Wall Street Journal back in May, and online, that figure could be much larger. While Facebook amplified our ability to share thoughts with others, it also takes a hit when people realize the amount they’re sharing through observing others. Mark Zuckerberg’s baby is still a long ways off from the precipitous decline of Myspace, but the data and the details gathered from teens show Facebook needs to be nimbler than ever to stay relevant to the next generation.


There are 360 Comments. Show speed reading tips and settings

ryangould
Interesting, as certainly in my experience as a student, many have flocked to Twitter—with their reason being that, in essence, “Facebook isn’t cool anymore.”
Mar 2, 2013 | 7:04 AM
Posted by 50kzone at 22:37