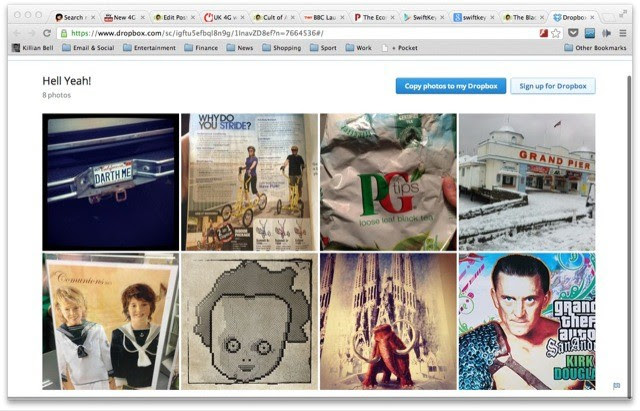 All of these photos could be in different folders. Dropbox just doesn’t care.
Dropbox is about to add a great new feature to make photo-sharing a lot easier. It’s called Albums, and it lets you group together photos from anywhere in your Dropbox folder structure and share them as a single album. The service is currently in beta testing, but if you have an Android device the most recent update also contains a version.
Let’s take a look at how it works on your Mac.

First, let’s take a look at the current way to share photos using Dropbox. First, you can choose to share either a single photo or a folder. You then right-click on it, or use the various sharing tools built-in to the web or Dropbox apps, and share that folder. And if you move one of those pictures out of the original folder, it will disappear from your share.

Dropbox Albums does away with folders altogether

The new way does away with folders altogether. To start using Albums, you head over to the Dropbox website (you can’t currently do this from the desktop or the iOS app) and click the new “Photos” tab on the left side.
Now, you’ll see your pictures. All of them. No matter where you have your pictures stored in your Dropbox, they all show up in this view. It’s like doing a Spotlight search on your home folder for images and saving is as a Smart Folder. 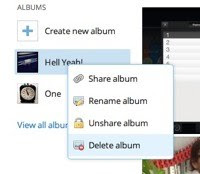 Albums is as slick as a desktop app.
This has some advantages. First, you can combine pictures into an album no matter where they are on your computer. Second, if you move one of those pictures, Dropbox knows, and it has absolutely no effect on the shared Album (well, one: when you right-click the image and choose to reveal it in its actual folder, you’ll be taken to its new home).
This is fantastic. I use Dropbox’s Camera Upload feature to suck in all pictures from my iPad and iPhone. Right now they’re just sat there as a backup, but now I can make albums of special events, or of screenshots I want to share with the rest of the Cult of Mac folks, or anything, and the originals will remains where they are.
Think of it as being like Apple’s Photo Stream, only cross-platform and not terrible. I use the hell out of Photo Stream, and love it, especially as it pushes pictures to friends and family so easily. But it also breaks fairly often, and requires that people not only have an iDevice, but that it runs iOS6. So I can’t send pictures to my mother’s first-gen iPad, for example.

Making albums is so easy you’ll cringe when you go back to iOS’s Photos app.
Dropbox really shows its web chops with the Albums interface. It really does feel like a native app. One note – it won’t fully work in an iOS browser, even if you cheat and use something like iCab to pretend it’s a desktop machine. You can browse picture and albums in Mobile Safari, but you can’t create or edit them.
To create an Album, just click the New Album button and type in a name. Then get to adding pictures. You images are arranged in a patchwork of big thumbnails by date. Clicking one will put checkmark and blue border on it, and clicking again will deselect it. Mac users will be a happy to see that holding down the shift key will let you select a block of images at once. Very cool.
Once selected, click the button at the top of the screen to add them to the album. The new album shows up in the list on the left, and you can also click “View all albums” to see a grid view of all your albums.
Now, try this: When in an album, right click a picture and choose to “Show in Folder.” Make a note of it, and then head over to the Finder. Find the picture and move it somewhere else in your Dropbox. Now, go back to the Album (refresh it if you like, or just navigate away and back again). It’s still there! And choosing “Show in folder” again will now reveal it to be in the new location. 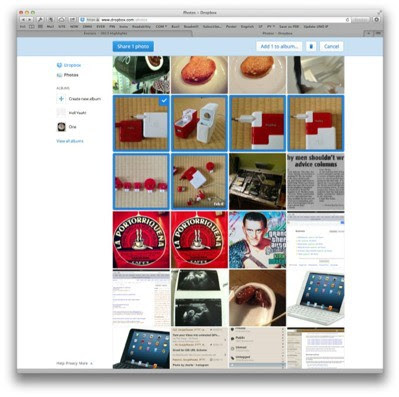 Shift-clicking works just like in the Finder!
Now try this: right click an image and choose to “Set as cover.” This allows you to pick the thumbnail image that’ll show up as the album’s “cover.” Another nice touch, especially in v1.0 of the service.

Sharing an album can be done in a few ways. The first is to just click the button at the top of the screen when viewing that album. The other is to right-click (control click for those one-button mousers still out there) the album thumbnail wherever you see it. The result is the same: you’ll see a new sharing dialog.

Sharing is as easy as creating.
The dialog looks just like a little email, which is what it will turn out to be. On first run you will be prompted to import your contacts from Gmail, Yahoo mail or Facebook, and you can add any of these at a later time. Fill out the recipient, add a message and send. You can also share via Twitter or Facebook.

The lucky recipient will receive a link. And here’s the neat part: They can view your pictures even if they don’t have a Dropbox account (more on viewing in a sec). This is not only fantastic news for sharers, as you can just fire off those links without worrying whether the receiver will be able to see your pictures. It’s also good marketing for Dropbox, as the linked page lets you do one of two things (apart from just looking at the picture that it).
On the Album’s page there are two buttons, letting you either copy the pictures to your Dropbox or to sign up for a new account. I’ll bet that this will be a great way for Dropbox to get more users. 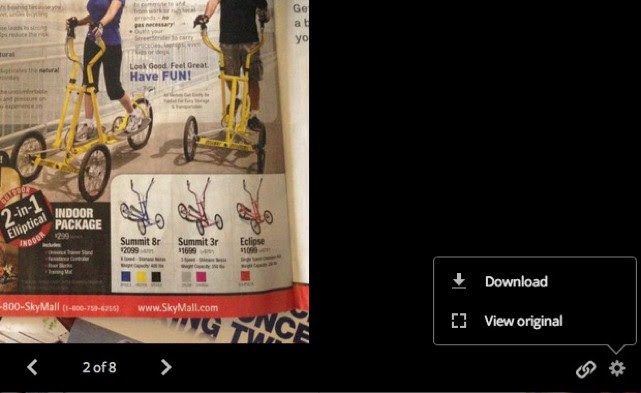 Slideshow view. It’s fast, but you need Flash to view videos. Ugh.
Viewing is a breeze. You click on an image and the view switches to a slideshow. You can click the little arrows at the bottom, or you can just click the image itself to advance to the next one. You can even view videos (Albums also pulls all your videos into its world), although you’ll need Flash installed to do it. In 2013!
There’s one little bit of UI polish that’s worth a mention. When you exit slideshow view and go back to the thumbnail view, the picture you last viewed does a little bobbing, pulsing animation to show you where it went.

When third-party apps get access, Albums will be huge.

As I mentioned, only the Android app has Albums built in so far, although looking at the support pages it seems very similar (in implementation at least) to the web app. An iOS version is promised, which might just make me ditch the native Photos app (for sharing and making albums anyway – there’s no way I could chop it out altogether).
But if third-party apps get access to this then Albums will be huge. Imagine an app like the amazing Unbound (which presents photos on Dropbox just like the native Photos app) only with Albums support. Or a word processor app which could pop open a file browser and access your Dropbox photo Albums.

Dropbox is way ahead of Apple when it comes to accessing and sharing your files from anywhere, and features like Albums and Camera Upload turn it from a “dumb pipe” service into something essential. No, it can never be as fully integrated into your iDevice as Apple’s own solutions, but as it becomes the backbone of more and more apps, and as you can run it pretty much anywhere, who cares?
Dropbox Albums