Everyone wants to be in on the conversation, but sometimes distance can make in-person meetings hard. We tested five multiperson video chat services--Google Hangouts, Skype Premium, Tinychat, AV by AIM, and AnyMeeting--to find the best place to conduct a group meeting online.

A lot of variables can affect the performance of a video chat service, from the available bandwidth to the quality of the participants’ webcams. In our lab tests, we set up five computers to video chat with one another: two desktop PCs, two Windows laptops, and a MacBook. We provided ethernet connections for the desktops and wireless Internet connections for the laptops. We also looked at how easy it was to set up and use each service, and considered whether each service had any extra features (such as text chat or video silencing) to enhance video chat.
Here’s what we found.

Setup: To use Google Hangouts you need a Google account (with a Google+ profile). You also have to install a browser plug-in, which works with Windows XP or higher, Mac OS X 10.5 or higher, or Linux. You can start a hangout from your Google+ page by clicking a button on the right side of the screen that says 'Start a Hangout!' This action takes you to a test page, where Google starts your webcam and microphone, but no one else can see your video broadcast. 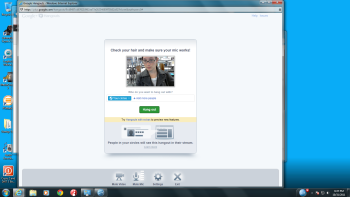 Before you enter a hangout, Google allows you to preview what you'll look and sound like to other members of the hangout.In the test page is a box that allows you to choose which “circles” (or groups of friends) to inform about your hangout. Once you start the hangout, everyone in those circles will be able to see that, and they can join your hangout if they want.

When you’re ready, click the 'Hang out' button from the test page to go to the video chat room. You can invite more people by typing their Gmail addresses in the bar on the left side.
You can invite up to ten people to video chat.

Video interface and quality: While you’re in a hangout, whoever has the dominant voice will enter the large main video window, and all the other video broadcasts will appear in smaller video stream windows at the bottom. This arrangement, of course, assumes that every hangout will remain civil. If two people speak at the same time, with nearly equal tone and volume, Google Hangouts still chooses one to be front and center in the chat. Regardless, members of the hangout can manually adjust the layout by clicking on any of the smaller video broadcasts to see that stream in the largest window instead.

Also, with five or more people in the same hangout, the video streaming can stall, and sometimes it has trouble resolving. Voices can become temporarily garbled on occasion, but overall the video quality and sound quality are both very good.

Extra features: Google Hangouts offers several features in the videoconferencing window besides just video. One large button beneath the video windows allows you to send text chats to the whole group during the hangout. Unless you tell people you're going to send text, however, the Hangouts window gives no indication that a member of the group is sending written messages--each participant has to click the Chat button on their own initiative to read any messages that group members might have written. 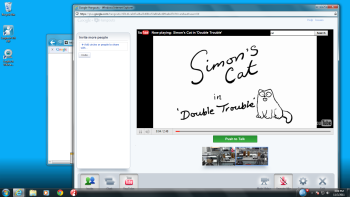 You can watch YouTube videos while you're in a hangout.One really cool feature: A YouTube button in the bottom toolbar allows you to search for videos that you can then watch in the main screen within Google Hangouts. Since Hangouts automatically mutes your mic during playback, no one else can hear you over the YouTube video’s sound; a 'Push to Talk' button lowers the video’s sound and turns on your mic if you need to interject in the hangout conversation before the video is over.

Bottom line: Google Hangouts is a great way to gather a small crowd to video chat--as long as everyone has a Google account. If you’re on a laptop, you may want to use it only for short chats, as smaller computers can easily overheat after running Hangouts for a long time.

Setup: To start a multiperson video chat on Skype, you must have a Skype Premium membership, which costs $9 a month (or you can buy a Skype Premium day pass for $5). Once a Premium user has set up the videoconference, he or she can add any Skype members to the video chat, whether those people use the free service or the Premium service. If the Skype Premium member logs out of the group chat, the session ends for all participants. 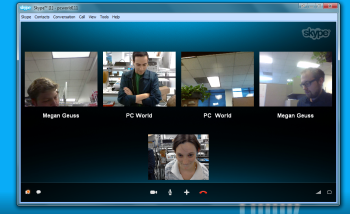 Both the free and Premium versions of Skype require that you register with the company and download its software and chat sidebar, so it isn't a great option if you need to organize a videoconference with a group quickly (unless you know that everyone in the group has Skype). Once you’ve signed up, you can find friends via Facebook, Gmail, or Hotmail, or search by Skype screen name. Skype Premium allows videoconferencing with up to 24 people.

Skype is a popular service, and if you’ve had it for a long time (as I have), you might need to update the software on your computer to get multiparty video chat to work (I had to update from version 2.8.0.866 to version 5.3.0.1093). Luckily, doing so is easy: Just go to Skype in the toolbar, click Check for updates, and follow the directions. The latest version is much slicker, with fewer windows that clutter your screen.

Video interface and quality: In general, Skype’s video and sound quality were very good in our tests. The video was on a par with that of Google Hangouts--generally accurate, with only a little latency between what a webcam was broadcasting and what everyone else could see on the screen. Sometimes, though, a video stream would freeze for about half a minute before resolving, a problem that grew worse the longer the conference continued. The sound quality was better than the audio in Google Hangouts, but only slightly.

The more people who join the call, the smaller the video boxes get, but you can click on individual video boxes to enlarge them. 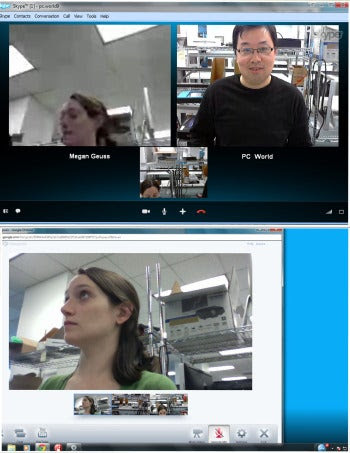 The top image is a screenshot from Skype, where the image on the left was from a MacBook's built-in iSight webcam and the image on the right was from an HD webcam. The bottom image is a screenshot of Google Hangouts; the large center image came from the same MacBook iSight camera.The quality of each individual webcam seemed exaggerated on Skype Premium in comparison with Google Hangouts. In one test, I hooked up two desktops with 720p HD webcams and one MacBook with a built-in iSight webcam (which has always given me a pretty clear image), and the contrast between Skype’s resolution for the iSight and for the HD webcams was startling. Connecting the same three webcams in Google Hangouts did not result in such a dramatic difference, and the feed from the iSight was much clearer there.

In addition, Skype lets you send files (pictures, screenshots, MP3s) to the other people involved in your chat, through the main window. Thanks to this convenient feature, you don’t have to navigate to your browser or email client to send files to the group.

Bottom line: Videoconferencing with Skype Premium costs money, and requires more setup than most other video chat services do. The voice quality is the best among the services we tested, but the video quality is no better than that of the (free) Google Hangouts service.

Setup: Tinychat is a browser-based video chat service, so you have nothing to download. You can quickly start your own chat room (or, if you’re feeling lonely, you can enter any one of the many public video chat rooms the site hosts). Tinychat is free, but annoying banner ads surround the chat interface. 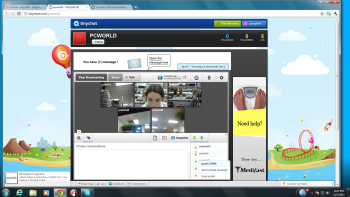 Tinychat is free, but all the ads around the video chat window can be distracting.Once you decide to set up your own chat room, Tinychat walks you through several windows to help you select a webcam and a mic, and it asks you to choose either an open mic or a 'Push to talk' button that will mute your mic until you click and hold the button down.

Inviting other people to join the video chat is easy. Once you’ve started a chat room, go to the Share button on top of the video, and Tinychat will generate a URL that you can then send to others. Everyone else joining your Tinychat group needs to sign in through Facebook, sign in via Twitter, or come in anonymously as a guest. New guests will be able to see the video broadcasts that are already happening; to add their own video to the chat room, however, guests must click 'Start Broadcasting', after which a pop-up appears requesting access to their webcam and mic.

Video interface and quality: In Tinychat you can share only up to 12 broadcasts, but you can have an unlimited number of viewers.

Although the video quality on Tinychat is pretty good, the sound quality is miserable. I heard a loud buzzing in the background when any noise was present on the microphone. Voices sounded louder and slightly distorted compared with voices on Hangouts and Skype, even after we made several adjustments to the microphones. And when the noise from all of the microphones was soft enough, the sound would just cut out for a minute, leaving me wondering if my headphones had malfunctioned.

In the lab test, I also experienced a 2.7-second delay on sound and video, which was a little annoying. Sometimes, after running for more than 15 minutes, the video will stall, and you may have to refresh your browser to start the video again.

Extra features: One of the coolest things about Tinychat is the EtherPad Lite function (which you can start by clicking the paper icon under the video box), a word-processing box in which all members of the chat group can write, allowing collaboration on documents. Each member is assigned a pastel color, so you can see who wrote what during the video chat.

Bottom line: Tinychat may be a good choice if you need to gather a lot of people in a video chat room quickly. It has no real setup, and you invite other members simply by sharing a URL. It's especially great if you’re working on a project that requires more writing than talking (such as in study groups or project planning) and you just want the video available so that you can ask quick questions. It could be pretty useful for a family-wide game of charades, too. But if you want to have a long discussion with the rest of your group, Tinychat is not your best option.