I’m a creature of habit. No matter how many times I try to make a Google Reader client for Mac part of my daily routine, I always seem to go back to Google’s web interface. Don’t get me wrong—there are several good native clients out there, but I hadn’t found anything to be substantially better than Google’s web client. Caffeinated 1.2.2 (Mac App Store link) has changed all that. 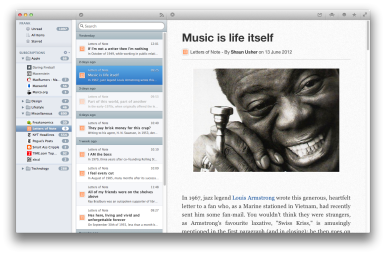 On the surface, it’s simply beautiful. Its minimalist interface, laden with pleasant blues and grays, manages to be comprehensive without being overwhelming, despite my dozens of feeds and hundreds of unread items. In addition, Caffeinated includes an optional menu bar icon that shows the number of unread items in your feed, which is especially helpful when using the app in full-screen mode—it’s kept out of sight when you don’t want to be bombarded by your feed, but enables you to focus on it when you do.

It’s also very fast. In my experience, Caffeinated launched almost instantaneously, and after just a few times using it, its robust yet uncomplicated keyboard shortcut functionality turned me into a feed-browsing machine. I’ve never felt so empowered by an RSS reader.
If you like sharing the things you read, Caffeinated has seamless integration with several third-party services including Twitter, Facebook, and Google Plus, as well as “read later” services such as Instapaper, Readability, Evernote, and even Safari’s Reading List.
Caffeinated has also made me more productive. It’s dead simple to use, beautifully designed, well connected with several great third-party services, and lightning fast. I recommend it without reservation, and I hope you enjoy using it as much as I do.

[Frank Tisellano is a user-interaction designer, born and raised in New York City.]
Want to stay up to date with the latest Gems? Sign up for the Mac Gems newsletter for a weekly email summary of Gems reviews sent directly to your Inbox. You can also follow Mac Gems on Twitter.