A tantalizing glimpse of the future limited by the reality of the present
I spent the entire time I was reviewing the 13-inch MacBook Pro with Retina Display thinking about the MacBook Air. Not the current Air, which has become the best overall laptop on the market, but the very first Air — the one from 2008 that was ridiculously underpowered, featured terrible integrated Intel graphics, had just 2GB of RAM and an 80GB hard drive, and cost an absurd $1,799. I know people who bought that computer and felt an immediate combination of intense love and deep regret — while it was blindingly clear that all laptops would be that thin and beautiful in the future, it was equally clear that Apple was too far ahead of the performance curve in the present. Four years later, the Air has become Apple’s mainstream product and the PC industry is still working to catch up. The curve has flattened out.

It’s the same thing with the 13-inch Pro — it’s hard not to love this thing when you first see it. Just look at that screen. But you’re paying a lot of money for a computer that once again offers a single tantalizing glimpse of the future only to be limited by the realities of the present in almost every other way. One day all computer displays will look this good. One day we’ll sit around campfires, drinking moonshine and telling our children nightmare tales of visible pixels and display resolutions under 200ppi. That day will be wonderful. It will also have a reasonable graphics chip, more than 128GB of storage, and cost less than $1,699.

Until that day comes, you should either trade up to the 15-inch MacBook Pro with Retina Display or buy a MacBook Air and save your wistful Retina dreams for a $499 iPad on the side.

Living in a retina world

The good news is that lots of apps have been Retina-enhanced since the 15-inch Pro came out. All of Apple’s pro and consumer apps are enhanced, of course, and major apps like Office, Chrome, and Adobe Premiere have all been updated in the past few months. (Adobe’s also promised an update for many other apps, including Photoshop CS6 and Lightroom, in the fall.) And Apple maintains an entire section of Retina-enhanced apps in the Mac App Store if you’re looking for more, with indie favorites like Evernote, Day One, Pixelmator, and Tweetbot all offering support.
The bad news is things can look like garbage if you’re not looking at Retina-enhanced content. The now-deprecated Twitter app is probably the most egregious example: it looks so blurry and out of place on this display that it’s just sad. And while web browsers like Chrome and Safari have been updated for the Retina display, the web itself is still catching up: you’ll notice blurry low-res images everywhere, and sites like Facebook and YouTube that mix Retina-enhanced text and icons with standard assets look fairly messy. Things are improving rapidly, but for now potential Retina owners should take a note from Victor Ward: the better you look, the more you see.

Lastly, it’s important to note that 1280 x 800 isn’t actually a huge amount of screen real estate. It’s about the same as the standard 13-inch Windows laptop resolution of 1366 x 768, but it’s noticeably smaller than the 1440 x 900 on a MacBook Air. Everything is far more beautiful at the Retina setting on the 13-inch Pro, but you’ll have less working space than you might be used to.
You can go into the display options and switch to 1440 x 900, which still looks nice, but you lose a hair of Retina crispness since you’re scaling to a non-native resolution. Think about it this way: where the Retina "best" setting fits each pixel of a 1280 x 800 image perfectly onto four pixels of a 2560 x 1600 screen, each pixel of a 1440 x 900 image fits imperfectly onto 3.6 pixels of the display, so it’s a little bit blurrier. You might not notice it, but it still isn’t what you’re paying for. And running at higher resolutions imparts a performance penalty, which isn't good news on this machine — more on that in a bit.

But for now, the 13-inch Pro offers a tiny beautiful window onto a tragically imperfect world. Unfortunately, that gorgeous face is often betrayed by a rather pedestrian mind. 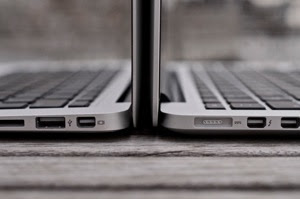 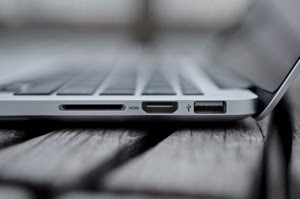