Employees at eyeglasses designer Michael Pachleitner Group have no reason to consult desktop computers, tablets or old-fashioned paper binders to find items in their 22,000 square-foot warehouse. The information is right in front of their faces.

Technology is being developed to project images or other digital information on to the lens of glasses. See one type of device under development. 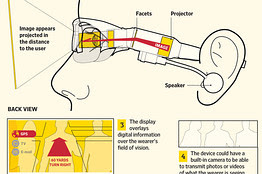 The Austrian company recently outfitted warehouse workers with a head-mounted device that displays digital information on a clear lens over one of the eyes. The lens gives visual directions through a Wi-Fi connection to the 1.4 million items stored in the vast warehouse. It also confirms they made the right pick, and frees up their hands.

By July, the company's six warehouse pickers will be wearing the device all day, cutting down on picking errors by an estimated 60%, said Chief Financial Officer Neil Lambert. "We were skeptical in the beginning" about the device, which reminded him of military gadgets seen in movies. "It was a nice surprise to see that it works." 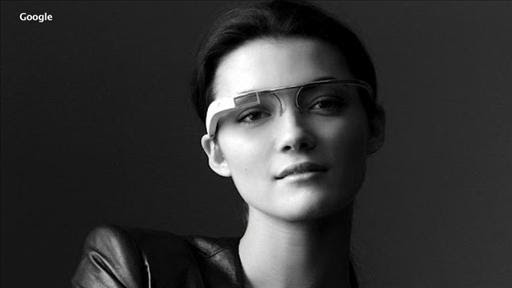 Augmented reality is no longer just science fiction. A number of companies are developing glasses-like devices that transmit and display digital information onto wearers' field of vision. WSJ's Amir Efrati reports.
The $13,000 device made by Austrian company Knapp AG gives a glimpse at the future of "augmented reality," by using transparent displays to overlay digital images atop a person's view of the physical world.

The rise of Internet-connected smartphones and advances in "heads-up" displays are accelerating the development of all sorts of wearable augmented-reality devices. Such gadgets have long faced skepticism because they were uncomfortable to wear, ugly, and expensive, reserved only for corporations and military agencies.

Google Inc. caused a stir last month when it offered a peek at futuristic-looking headgear that would essentially turn an eyeglass lens into a computer screen. The wraparound glasses, which place a single lens above a person's right eye, display digital information like maps and emails on the glass. People may be able to control the device using their voice or gestures.
Google has tentative plans to sell its Google Glass device to consumers starting sometime next year, said people familiar with the project. A Google spokesman declined to comment.
Meanwhile, smaller companies such as Lumus Ltd., Vuzix Corp., Laster TechnologiesSAS and Recon Instruments Inc. are also hoping to convince skeptical consumers to wear unusual-looking gadgets—from glasses that transmit turn-by-turn directions so people won't have to look away from the road while driving, to displays built into ski helmets that show skiers how fast they are cutting through the snow.

Some computer scientists increasingly envision a world in which people wear glasses-like devices with a built-in camera and use apps that can recognize objects and faces—using technology called "computer vision"—and automatically retrieve information about those objects from the Web or other sources.

For example, an American visiting another country could wear such a device and run a translation app to overlay English on foreign-language billboards, street signs and store fronts in his field of vision.

The closest device to Google Glass that is currently on the market for consumers is Recon Instruments' GPS device that is inserted into specially made goggles worn by skiers and snowboarders. For about $500, the goggles display information such as speed in a small box located below the user's field of view. For around $600, the product can play music and display text messages and caller ID when attached to a phone.

Recon Chief Executive Dan Eisenhardt said the Vancouver company has sold "tens of thousands" of the devices annually since the product launched in 2010. The 65-employee company is profitable, he said, and plans to launch similar products for other action sports such as motorcycling.

At Knapp, the company began working on its warehouse-picking device by buying lenses from 12-year-old Israeli firm Lumus. The lenses, placed in front of an eye, can create the effect of watching images on an 87-inch TV screen from a distance of 10 feet.

Lumus said the U.S. Air Force current uses its technology to show weapons information in the helmets of fighter pilots. The company added it is working with several hardware manufacturers to build consumer devices around its lenses, but declined to comment further.
"We thought this could be a nice additional product, but we didn't expect it to be so important," said Peter Stelzer, a business development executive at Knapp. He adds the company has sold around 100 of the devices since last year.

Meanwhile, Vuzix and Laster Technologies said that next year they plan to launch a pair of regular-looking display glasses for consumers. The devices, which would cost several hundred dollars, would connect to smartphones so that apps could be projected onto lenses. "It will be an eye phone," said Laster CEO Zile Liu.

Until more heads-up displays hit the market, people will have to rely on their smartphones or tablets to mix the real world with digital images, through the view of a device's camera.
A number of mobile apps already incorporate augmented reality features on smartphones. Yelp Inc.'s mobile app, which rates restaurants and other businesses, lets people hold up their phone and see digital markers on the screen that show the location of nearby businesses. Software from Germany-based Metaio GmbH is being used to create tablet apps that flash repair instructions across the screen when the camera is pointed at car engines or computer printers.

Videogames are also fertile territory for augmented reality, with Sony Corp.'s PlayStation Vita device and 13th Lab AB's "Ball Invasion" game for the iPad already providing such experiences. The cretators of "Ball Invasion" say the app uses "simultaneous localization and mapping technology" to allow people to shoot bullets at digital spheres that hover next to real-world objects and walls, as seen through the iPad's camera view.

"By 2020, the world will have perfect augmented vision," said Dave Lorenzini, who designs augmented-reality apps and related businesses at consulting firm Augmented Reality Co. "It's like creating the Internet again but inside the real world."

Write to Amir Efrati at amir.efrati@wsj.com